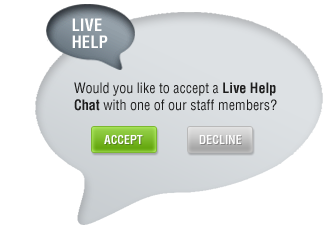 About us- pill counters and scales Fulcruminc.net

In February 2014, Scientific Industries, Inc. (OTC: SCND) came into possession of the Torbal Scales line through an asset buyout of Fulcrum, Inc. Scientific Industries, being a renowned force in the laboratory industry with their signature Vortex Genie products, decided to use the pre-established Torbal brand to break into the weighing market. Scientific was founded in 1954 and over the years has developed high-quality, durable products. Their vast resources provide them with the ability to continue developing great, new laboratory lines and continue to be a market leader!

Scientific Industries is also the parent company of Scientific Bioprocessing Inc., which specializes in non-invasive pH and DO measurement systems used in many pharmaceutical research and development applications. 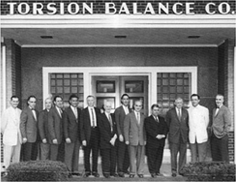 The Corporation had its principal place of business at 92 Reade Street, New York, NY, and a plant in Jersey City, NJ until May of 1949 when both the New York office and the Jersey City plant were moved to New Jersey as part of a new factory which was erected in Clifton. 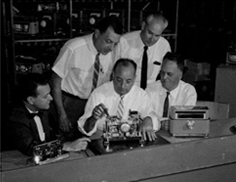 After the acquisition of the business of Christian Becker, The Torsion Balance Company formed a New York Corporation called Christian Becker Incorporated by filing a certificate dated February 18, 1915. Its directors were Harold H. Fries, William Clark Symington, and Robert B. Symington, who were also its original, stockholders; the company was located at 92 Reade Street, New York City. This corporation remained in existence until the year 1943 when it was dissolved in the manner later described, and thereupon became a division of The Torsion Balance Company.

Shortly after the dissolution of Christian Becker Incorporated, The Torsion Balance Company on May 9, 1944 registered the name "Christian Becker" as a trade-mark with the United States Patent Office and had the exclusive right to that mark until May 9, 1964. Harold H. Fries died on June 29, 1946 and his shares were ultimately registered in the name of Wills and Company as nominee. 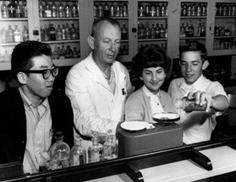 Upon the death of Harold H. Fries, it was found there was no one suitable to act as directing head. The attorney for the estate, Walter D. Fletcher, was designated as President of The Torsion Balance Company as an interim measure until a new directing head could be found. In the intervening months, this effort went on, and on December 13, 1946, Charles E. Donovan was made Vice President and active directing head of the Company. He was elected President of the Company on November 12, 1947.

At the meeting of the Board of Directors on December 13, 1946, it was decided the Company would undergo a complete modernization. In the course of this modernization a new plant was erected, the three principal lines of balances were redesigned to be more acceptable in the market, new machinery was acquired, new tooling and new sales policies were adopted, new accounting procedures were installed, and practically a new organization was created.

Fulcrum Inc. was established in 2000 when it acquired Torbal™, and the Torsion balance prescription line. Torbal™ dates back to the 1800’s when it became famous for its superior weighing mechanisms, which were based on the Torsion design. During the 20th Century, the Torbal DRX mechanical model became the prescription balance of choice for pharmacies throughout the United States. Today, the DRX success continues with some of the most advanced digital pill counting and prescription scales available on the market. Torbal’s DRX line is designed and dedicated solely to compounding and pill counting applications. The goal and focus wass to provide pharmacies with high quality pill counting scales that are very fast, accurate, affordable, and offer an outstanding ROI. All DRX pharmacy scales are NTEP-certified for pill counting and prescription use in all 50 states. No matter which DRX pill counter or prescription scale you choose, you will always receive outstanding quality and support.

The purposes of that corporation were to "acquire the ownership of patents on scales, balances, automatic discharging meters, and other instruments of precision and to manufacture and sell such articles.

Five years later, The Torsion Balance Company was organized under the laws of the State of New York by filing a Certificate of Incorporation on January 7, 1902. History The Corporation had its principal place of business at 92 Reade Street, New York, NY, and a plant in Jersey City, NJ until May of 1949 when both the New York office and the Jersey City plant were moved to New Jersey as part of a new factory which was erected in Clifton.

Who is Christian Becker?

Christopher Becker came to New York from Arnheim, Holland in 1836, leaving his two sons Jule and Henry in Holland. With his other sons Christian and Ernest, he established an observatory at 54 Columbia Street in Brooklyn where he manufactured nautical and astronomical instruments. 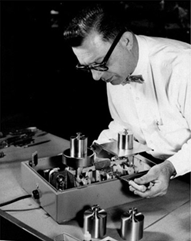 In 1854 Professor J. Renevick of Columbia College asked Christopher to manufacture an analytical balance to supplement several British and German ones he already had. The result was good, and Becker and Sons was founded for the purpose of manufacturing balances and weights. Christian and Ernest were the Becker and Sons. In 1861, possibly to get away from the Civil War, the family returned to Holland and manufactured balances in Antwerp. It is likely the other two brothers Jule and Henry participated in this venture and gained their knowledge of balances in this way. When the Civil War ended (1865), Christopher, Christian, and Ernest returned to the United States and established a new factory in Hudson City, New Jersey. Jule and Henry established Becker and Sons, Rotterdam and H. L. Becker, Fila, Brussels. Whether there were originally two joint ventures is not clear, but Jule is predominately associated with the Rotterdam Company and Henry with the Brussels firm. 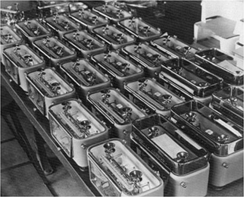 Christopher moved from Hudson City, NJ to Newark, NJ in 1874 to New Rochelle, NY. In 1884 the sons left Christopher and founded their own business as Becker Bros. Christopher continued his business as Christopher Becker but apparently died soon afterwards.

In 1892 Ernest died, and the name was changed to Christian Becker. The company was bought by The Torsion Balance Company.

In 1915 Christian's two sons, Christopher and Frank, continued to be associated with The Torsion Balance Company. Christoper died in 1949 and Frank in 1956.

Christopher (Sr.) is credited by the 9th Edition of Brittanica with the invention of plane bearings.

Christopher (Jr.) held the patent on the chainomatic device (1915) and received the Franklin Medal for this development.